Child of the Wild Coast: Story of Shannon Ainslie

“You are going to love this book! As you read the story of Shannon’s life and his many encounters with sharks, the author will enrich you with a thorough look at life in South Africa and what it is like to be a surfer on the Wild Coast. This book ultimately is about how God’s hand works in our lives to shape us and reveal His purpose for us. Let it speak to you and enjoy the ride.” 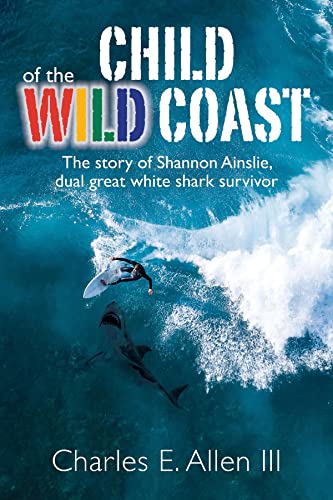 Child of the Wild Coast tracks the life of a South African teen who teeters on the brink of suicide only to be transformed by a violent shark attack. Video of the attack quickly becomes international news fare, astounding the world. Later, buoyed by his soaring faith in God, Shannon paddles to the very side of another thrashing great white to save a young friend.

Shannon’s story also features dramatic accounts of six more Wild Coast shark attacks, as told by the victims or those who tried to save them, and reveals the intense risk and unique culture of surfing. Above all, Child of the Wild Coast testifies to the overarching power of vibrant faith.